I bought this mic two days back at a local big box to use primarily for Karaoke (connected to another singing machine product), and it's basically unusable for this purpose.

The muti-directional mic options seem like a good idea, but the mic appears to decide which ones it wants to use regardless of the option chosen; the solo singing mode picks up sounds from across the room - even with noise suppression active - and that results in, you guessed it, feedback.

The included troubleshooting recommends having the mic's internal volume at 1/3 and adjusting upwards to your preference l, but that just leaves you stuck between not hearing vocals over the music or feeding back with every note. Overall, the sensitivity is apparently geared towards the advertised podcasting functionality rather than the advertised singing one.

Aside from that, theres another randomly occuring issue with the (arguably fun, if short lived) built-in effects where the mic just refuses to recognize selections, and needs to be powered off and back on to work properly. My last major issue is the delay when no effects are present, which are a good 30-50 Ms at least, and make karaoke even less fun.

The pitch correction is nearly unnoticeable, but that's the point, and I won't complain of any shortcomings with the auto tune despite the "studio quality" promises... But sadly, it's not enough to keep from returning this to the store from whence it came.

This ain't one of them botted views. I've had multiple mics before for recording music, and honestly this one is the best. The sound is so clear and crisp. It don't pick up any background noise with the right settings, and picks up all vocals you want it to with ease. If you got the money for it and are trying to make music, 100% get it!

B
Wired Microphone Bruce Morgan
I'm sure it works fine

I ordered it after being unable to find my mics for a month. The day after I ordered it my wife found the mics again, but I wasn't allowed to cancel the order as it had been processed. So I have a couple extra mics in a bag in case I every need them. :) Live and learn.

When i got it was not working

My 2 year old loves music and singing. This is the right gift to him.Its fun to sing with the built-in speaker. Sing along to the 2 preloaded songs and add some fun with the 2 sound effects.The Sing-along crew is ready to go anywhere with their backpack straps and your cuddly friend will hold the mic with the secure mic holder. 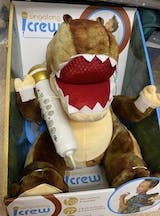 K
Sing Along Crew Kristal
Excellent gift for any child who loves to sing!

Uni Queen is a fabulous toy! My daughter adores singing and Unicorns so this is the best of both worlds! She’s able to put her trusty unicorn pal on and turn on the multifunctional microphone and sing until her heart is content. The mic is so easy to work however you need 3 AA batteries. If you’re gifting I would definitely add some batteries.I am truly impressed with the sound quality it’s great especially for the price.I especially love that there are 2 preloaded songs. My daughter loves making up her own songs and she loves having a tune to follow.Uni is not only adorable but also so soft and plush. The adjustable straps are a great feature and definitely appreciated because if she no longer wants to carry it while we’re out I am able to adjust the straps to fit me and carry it for her. 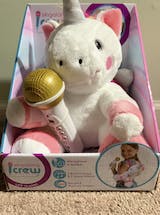 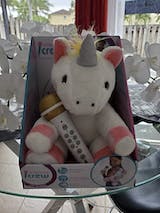 A
Sing Along Crew Amy
A hit with my 3 year old!

This Dino karaoke backpack has been a massive hit with my 3 year old son. He is average to petite sized and the backpack adjusts to fit him perfectly (doesn’t fall down and is a great snug fit). I love that the volume can be turned DOWN on this which is something I was initially worried about- I love my sons singing, but blasting a microphone through the house was giving me a headache just thinking about. With this, he can sing all day long and it’s not the least bit annoying. The product does take some AA batteries and they aren’t included, so you will need to purchase some if you want to use immediately.

Overall this is an amazing product, a unique and fun gift idea, and fosters some creativity. The future superstar in your household will absolutely love this!

They are in love their new bear backpack and really enjoy singing along with it. Such a fun gift idea!

My 3 year old loves this toy and to be honest so do I. It’s fun to record yourself saying something sweet and then letting your kid play it back as many times as they want! He also loves pushing the buttons, putting it on like a backpack and holding the mic.

This has been the favorite toy in the household since we purchased! The kid’s favorite feature is the sound effects. And it’s so cute!

Bought for my granddaughter..she and I sang all afternoon..she’s just starting to sing all the Disney songs…I’m recording and she’s singing and dancing with the backpack😂😂😂❤️❤️❤️

This singing machine stuffy is a huge hit with my three year old daughter right now. We chose unicorn of course and it’s just as pictured. She can wear her unicorn backpack, have her songs anywhere she goes, and it comes with sound effects, it comes with a few songs too. You will just need 2 AA batteries to get it going.

O
Groove Cube Outcast
a great karaoke for the money.

a great karaoke for the money. Works and sounds great and the app is very helpful. I haven't tried to download any music so I don't know how that would work.

We have so enjoying this singing machine. An added bonus is being able to easily carry it along. The microphone is so much fun and easy to hold.

Good sound and easy to use. Had good karaoke with friends.

I loved this! It’s so fun saw it off Tik tok. You can connect it to your car but you have to have a aux cord or else it won’t work on the car..